Friends of the Fraser Wetlands

A group of concerned citizens committed to preserving the environmental and cultural integrity of the wetland-rich Fraser Estate on Stony Lake.

We have one more request to make! (And it doesn’t involve money.)

FFW has requested that a delegation be recognized and heard at the North Kawartha Township Council meeting on Tuesday, December 6th. It is our hope that we can register our deep concern over the alarmingly ambivalent closing argument (and written submission) of the Township’s lawyer in the recent OMB hearing concerning the fate of the Fraser Wetlands.

The lawyer, who is contracted by the Township to represent and counsel them, neglected to mention in his submissions the North Kawartha Township Council’s resolution (#15-397) to oppose the Burleigh Bay Corporation’s development proposal. He also failed to adequately highlight the testimony of the Township’s only witness during the hearing – its own planning consultant, who stated that the development plan did not meet the standard of the Provincial Policy Statement 2014 (a prerequisite of approval) and could not be considered good planning.

The lawyer left the strong impression that he considered the development application an “amber light” situation – one that might proceed with caution if the OMB were to stipulate a number of (unenforceable!) conditions.

We’ve come this far, we simply can’t let this pass without taking action.

We hope you’ll join us in raising the alarm over this misleading representation by writing a letter to the North Kawartha Township Council supporting the position of FFW, which is to request that the Township ask the OMB to reopen the file so that the Township can restate its position.

No need to have attended the hearing. You can simply use the following template to show your support for FFW and email your letter to the Township clerk, Connie Parent (c.parent@northkawartha.on.ca):

I understand that the Friends of the Fraser Wetlands have requested to appear as a delegation before the Township Council at the Regular Meeting on December 6th. I urge you to grant the request.

Unfortunately I cannot attend the Meeting in person but I wish Council to know that I strongly support the FFW’s request that Council inform the OMB by whatever route is appropriate, that Council’s position has not changed since May 26, 2015 when Council passed Resolution 15-397 expressing Council’s opposition to the proposed development on the Fraser Property.

And here are some letters that FFW supporters have written in recent days: 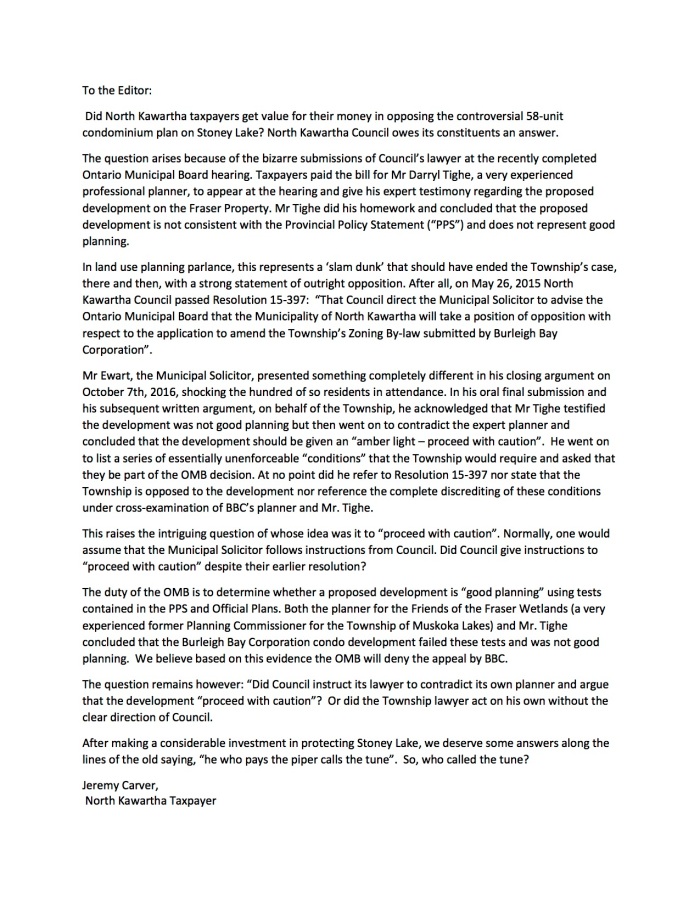 One thought on “Urgent: Help Needed!”